You can check the photos of the tournament in our Facebook page using the link below:

You can read the whole review at:

And check the complete results at:
https://www.fifapub.com/tournament/yager-bar-8th-of-december/ 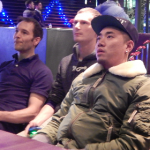 It was a great night. Fully booked again and also we had more people than allowed so we played a parallel tournament in the meantime. Everything lead us to think that we should increase the number of places per tournament.
The final was won by Highfalutin Rednecks (Hammy103 and 8of93) who just tied a game (in Semifinals) and beat Cursed Doctors (mitfordman and dgazit) 1-0 (Real Madrid – Barcelona) in the final. Both teams had chances to get the victory but there can be only one winner. Cursed Doctors were first timers and it seems that they will be a tough contender from now on.
Designated Missiles (linokl and des707) played much better than in their last tournament and were very close of qualifying themselves for their first final as a team. In semifinals they received a really weird own goal by Courtois but tied the game but lost on penalties against the winners. Thunder Kings (Lewin and Henry_Adebowale), it was the first time they were playing together and didn’t perform bad at all, but were defeated in semifinals by Cursed Doctors in an exciting game.
Monkey Robots didn’t find their game until the last two matches. After losing 0-1 their first four, they didn’t lose the faith and got the consolation title against Disco Bombers. Actually Disco Bombers had beaten Monkey Robots in the group stage but they couldn’t get the victory when it really matters. Both teams were first-timers but they seemed pretty solid.
And check the complete results at:
https://www.fifapub.com/tournament/yager-bar-8th-of-december/
If you want to check the photos of the tournament click here to go to our Facebook page. We’ll upload the video of the event later, this week.

Here you have the summary of the last week tournaments:

2nd of December, The Dog Star, Brixton: Click here to read the review

Our next tournament is the next Monday at Yager bar, don’t miss it out.

We hosted two FIFA 15 tournaments this November at The Dog Star: 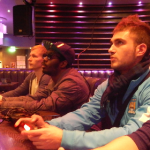 Fully booked again. An splendid 2v2 tournament took place, as every two week, at the Yager Bar. FIFA soundtracks (from 98 to 2015) at loud and the beer running all over.

It’s not surprising these days seeing The Wet Legs (Hammy103 and Abz_89) in a Fifapub final. Their tactic is clear, they play 2 stars teams in the group stage and then they keep the big dogs for the KO. Theoretically that’s what everyone should do, but it’s easier said than done. They faced Prehistoric Pelicans (Myltik and samcoANINFENG) who used PSG. The game started with a penalty for Prehistoric Pelicans who transformed it. After that a “Wet” meteor destroyed the Prehistoric birds, 4-1 at the end for “The Real Legs”.

Our semifinalists today were Piquant Stoppers (Loleit and benjamin) who just lost 2-1 against the winners using Real Madrid against Barcelona, a nice “Clásico” and a good prospect for these German boys. The other semifinalists were Intoxicated Pals (Utopico and Alessandro) who won every single game but the semifinals against Prehistoric Pelicans. They overkilled at the group stage using PSG in their last match whenever even a defeat had qualified them as top of the group. Definitely a strong Italian combination.

In the consolation Final Needless Lawyers (TheLegendOfLeo and Marc_bs_91) beat Wrecking Bankers (Melyz91 and Pasta) in the penalties. There were two remarkable points in this match. It seemed like a proper tennis match, 6-6 at the end of the extra time and 7-6 after the penalty shoot-out, AMAZING! Is also funny that in a tournament played in the City of London Lawyers and Bankers are facing in a battle without mercy, very appropriate. 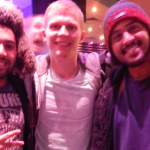 Amazing tournament at the Yager Bar. Several Fifapub winners played tonight and the level of the tournament was quite high.

The Wet Legs (Hammy103 and Abz_89) beat Myltik in the Final (2-0). The winners won almost everything, they just tied one game against Voracious Chuckers, two first timers (shaggy and sam_oz) that didn’t know each other from before and who played brilliantly at the group stage. On the other hand Myltik played just using Russian teams. He did a great job, specially on Semifinals when he beat (1-0) Bewildered Team (Lewin and Grossmatt22) who hadn’t lost a game and who had beat him previously at the group stage.

Abounding Noises made a Semifinal again and were pretty close of playing the final. They scored the first goal against The Wet Legs but received two goals afterwards which avoid them to fight for their second title at the Yager Bar.

Crooked Spankers (Haroldalmeida85 and Charlesgaraicoa) struggled at the group stage and finished fourth. But then they started to communicate better each other and surprisingly beat Voracious Chuckers at the Consolation Semifinal. On the other Consolation Semifinal Bairn Winners scored their first goal of the tournament almost in the 90th minute against Yager Passers who had beat him in the group stage 3-0. Finally Bairn Winners grabbed the consolation victory after the penalties. It was a close final, indeed.

You can go to the main page to fin out other active tournaments. 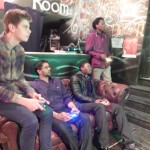 We are still trying to find the way in which 2v2 teams are as competitive as 1v1 teams. We believe that adapting the number of stars to create the teams set should make the deal. In this occasion we tried with 18 stars for 1v1 and 22 stars for 2v2 teams. However, none of the 2v2 teams made the semifinals. It’s also remarkable to mention than also all the semifinalists had played before 2v2 at Fifapub, whereas none of the consolation players had played with us before. That also makes the difference.

In the first semifinal Mlaw87 beat Kaziuk. Two regulars of this tournament who used their best teams to get a seat on the final but just one, obviously, could do it. 3-1 the final score.

The second semifinal was really vibrating. Hammy103 hadn’t played as good as he was expected and Abz_89 had beaten him badly at the group stage. However, Hammy played his best match, scored first and had several chances to score. The referee didn’t see two doubtful plays at Abz_89 penalty box, but he did whistle a penalty against Hammy by the end of the 90th which gave him the match (2-1).

In the Final Mlaw87 showed that he hadn’t keep any good team for it and Abz_89 still had the Real Madrid card. It was a good game, after all but the stars difference was too much for Mlaw to win his first title and was Abz_89 who did it. Well done!

In the consolation Final the One Hit Chuckers (midtfc and lfcdk) demonstrated why they were top of their group and beat Kalos. The Danish team proclaimed themselves consolation winners. Gennemstegt! 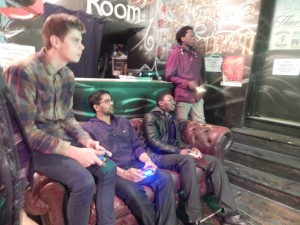